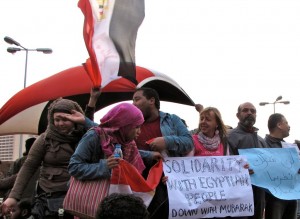 enjamin is cofounder of CODEPINK and Global Exchange. She can be reached for interviews in Cairo at (20) 107148431.

At 1 a.m. on Wednesday, February 2, I was speaking to one of the thousands of protesters planning to spend the night in Cairo’s Tahrir Square. “I hope you’ll get at least a few hours sleep,” I said, as we parted. “We don’t need to sleep,” he smiled. “We have been sleeping for 30 years.”

For a people who have been sleeping for three decades, Egyptians have awoken with a jolt and are spontaneously organizing themselves in a manner that is nothing short of a miracle. The police, after teargassing, beating and shooting protesters during the first few days of protests, have now vanished from the streets. Instead, citizen committees are doing everything from controlling traffic to patrolling their neighborhoods and protecting the shops. 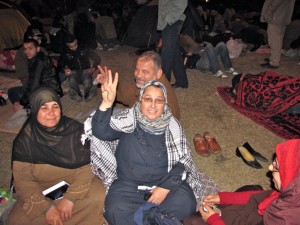 The main square in Cairo—Tahrir Square—is the headquarters of the revolution. Hundreds of thousands of people clogged the square today, and thousands have been camping out all week and insist they will stay until Mubarak leaves. They are young and old, mostly men but a surprising number of women and children. They are professionals and farmers, well off and poor, urban and rural, PhDs and barely literate. Some are long-time political activists who have been jailed by the regime; most have never engaged in anything political.

Army tanks line the entrance to the square, but a cordon of civilians separate the army from the protesters. Civilians also set up a 24-hour security detail to check people coming in—men frisk the men to make sure they have no weapons; women inspect the women’s belongings. The young people have organized clean-up crews, collecting garbage, sweeping, holding signs encouraging people to put their trash in the bins. A group of volunteer health workers in white coats walk around taking people’s blood pressure and checking up on their health. 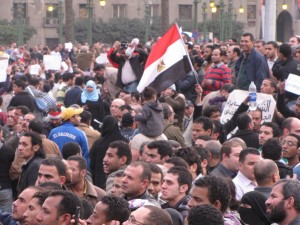 All the stores around the square are closed, but no one is going hungry. Supporters are constantly bringing in food and water to share. “Please, take a roll, madam,” an elderly man urges me. “Have some candy,” says a young girl handing out sweets. “Is there anything you need? Water? Food? Drink? Just tell us,” a man insisted. People are taking care of each other as if they were one big family.

“Where do you go to the bathroom?,” I asked one of the women, as there is not one port-a-potty or bathroom in sight for this sea of people. “We go out to the street, knock on doors and ask to use the facilities. Complete strangers are opening their homes to us,” she answered.

The techies in the group hooked up a live wire from the light pole to set up a phone charging station. Others hung a big white sheet from a building overlooking the square and rigged up a projector to broadcast Al Jazeera live. The government has closed down the internet, but everywhere you look, people are photographing and videoing the street scenes from their cell phones.

Circles of people gather to recite poetry, play music or sing. Others march round and round chanting “Down with Mubarak, down with Mubarak.” They hold handmade signs with all kinds of slogans. While mostly in Arabic, some signs in English say things like “Christians and Muslims, together against Mubarak” and “USA, Stop supporting Mubarak; We don’t wanna hate the USA.”

Some people are playing chess; others are quietly reading the Koran. Young girls gather around their Kindle reading revolutionary verses. A woman walks around with a picture of Che Guevara, explaining who he is to anyone who will listen. “It’s important to educate the young generation about revolutionary heroes,” she insisted. 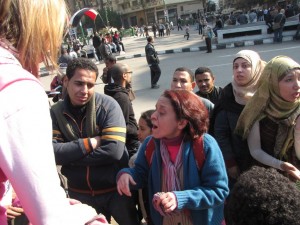 Everywhere, people are engaged in animated political discussions about their nation’s future. Some support Nobel Peace Prize winner Mohammad El Baradei as an interim leader. Others believe he is too far removed from the people, since he has lived abroad for 30 years, and they prefer a collective, interim government to write a new constitution and hold free and fair elections. Religious men with long beards, aligned with the Muslim Brotherhood, argue that Egypt needs a Muslim government; others disagree vehemently, insisting on a secular state. The discussions are passionate, but also friendly and respectful.

Egyptians have no idea what the future will bring, but one thing is certain: they have discovered their voices. One man who is helping with security told me that a few weeks ago, when his family was watching news on TV about people taking to the streets in Tunesia, his 10-year-old son asked him if he would participate in something like that in Egypt. “I was silent,” he said, “because I didn’t know the answer.” At the first sign of protests in Cairo, however, he jumped in. Now every night he runs home to show his son photos from the day’s events. “My son is very proud of me,” the father beamed. “So you are doing this for your son and the next generation?” I asked. “Not really,” he laughed. “I am doing this for myself. For the first time in my life, I am proud to be Egyptian.” 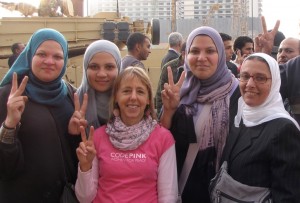 No matter how the situation in Egypt unfolds, a new nation has been born. Ordinary people are doing extraordinary things. They have overcome their fears and regained their dignity. They are writing their own destiny.

Stay tuned to our People to People blog for more updates from the frontlines of Egypt.