Rights Versus Markets: The Heart of the Debate in Cancun?

Global Exchange’s Medea Benjamin, Shannon Biggs and Carleen Pickard, along with some Global Exchange volunteers, are joining fellow climate justice campaigners, environmentalists and social justice advocates from around the world for COP16 in Cancun. Jeff Conant writes for Global Exchange and is collaborating media outreach with the Global Justice Ecology Project and the Indigenous Environmental Network during COP 16. Here’s his latest report:

In the middle of week two at COP16, protests have begun to erupt, both inside the halls of the Moon Palace, and outside in the streets of Cancun. When la Via Campesina, the world’s largest movement of peasant and smallholder farmers, called for a global day of action yesterday, people around the world responded. Actions in 30 U.S. states and over a dozen countries resonated with the sentiment among civil society in Cancun that the way forward for climate equity and climate stabilization does not lie with the elites, but with people in their communities on the ground.

Along with La Via Campesina, Pablo Solon, Bolivia’s Ambassador to the United Nations, Tom Goldtooth of the Indigenous Environmental Network, Ricardo Navarro of Friends of the Earth International, and a number of social movement representatives and government officials from the ALBA countries held a press conference to condemn the false solutions and backroom deals being pushed in the negotiations, and to call for mobilizations worldwide. The key demand they pronounced was for climate solutions based on traditional indigenous knowledge, community-based practices, human rights and the rights of nature.

Miguel Lovera of the Paraguayan delegation offered a cogent summary of what many here see as a fundamental failure in approach at COP 16: “There is a lot of talk here in Cancun about money, about chainsaws, and about plantations, but there is little talk about forests, or about the real work of the people who confront climate change everyday.” 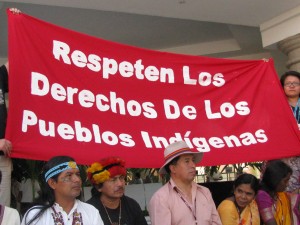 Indigenous Rights Protest at the Moon Palace in Cancun

The word on the street is, “This is not a climate conference, it’s a trade conference.” As Anne Petermann of Global Justice Ecology Project said, “In 2003 we came here to fight the World Trade Organization. Now we have to fight the World Carbon Trade Organization.” One way of looking at the problem, writ simply, is that there is a fundamental conflict between markets and rights.

By “markets,” we do not mean the simple exchange of money, the buying and selling of things, the basic transactions of the cash economy. Markets have always been places, physical places, where goods and services are exchanged, but where other forms of social and cultural exchange exchange take place as well. In any number of ways marketplaces, like our farmers markets today, have always been strongly allied with the commons – places where, despite the hand-to-hand exchange of money for goods, other things go on as well.

In contrast, when we talk about “markets” in the climate debate, we mean financial speculation, and the creation of commodities out of things that previously have been kept out of the market: water, air, Co2, biodiversity, cultural practices; investment for the sake of profit and development for the sake of economic growth.

These kind of market mechanisms, simply put, are incompatible with human rights and the rights of nature. A significant piece of the civil society struggle in Cancun is to make sure that rights are not mowed down altogether, nor taken as an afterthought, as “safeguards” in agreements like REDD, but are central to the way forward on climate. 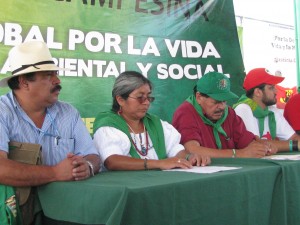 Natalia Green, Program Coordinator of the Fundacion Pachamama in Ecuador, is one of many people here in Cancun promoting the Rights of Nature. “The indigenous perspective that we are not apart from nature, but a part of nature has been taken up by many people,” she says, “because our juridical system that excludes nature is driving the planet to an ecological crisis. In Ecuador we worked through the political system in 2007 and 2008 to become the first country in the world to recognize rights for nature.”

The rights of nature paradigm is too complicated to explain in a blog post; for the newest material on it, see the new report “Does Nature Have Rights: Transforming Grassroots Organizing to Protect the People and the Planet.”

Ricardo Navarro of Friends of the Earth expresses concern for promoting human rights safeguards within multilateral policies, as opposed to building policies on a foundation of rights. “In regards to safeguards,” says Navarro, “what would you say if Pinochet said he would give safeguards for human rights; who’s going to believe him, by God? It’s a bank, for Christ’s sake, why would we expect a bank to promote human rights?”

Navarro continued, “We have to understand one thing; human beings are children of the Mother Earth. We often say that Mother Earth is where we live, but it’s more than that. We are like a creature in the womb of the mother earth. So, if we have rights, how is it that our mother doesn’t have rights? Its totally illogical. Mother Earth must have rights. The Government of Bolivia is absolutely correct in promoting the rights of Mother Earth. I hope other governments start to understand!” 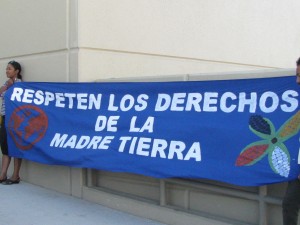 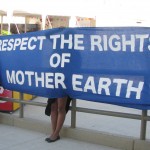