New Report Warns: We Fail to Respect Nature’s Rights at Our Own Peril 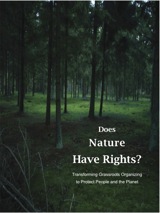 Greetings from the Global Exchange team at the COP16 international climate talks in Cancun, Mexico! Since arriving in Mexico and joining two of the La Via Campesina caravans from Acapulco and Le Salto (outside of Guadalajara), we’ve been blogging almost daily about our caravan experience, about community struggles and about solutions being proposed at the grassroots.

Today, we are pleased to be releasing the report, Does Nature Have Rights: Transforming Grassroots Organizing to Protect the People and the Planet, with the Council of Canadians and Fundacion Pachamama at the Diálogo Climático-Espacio Mexicano forum.

The report, “Does Nature Have Rights: Transforming Grassroots Organizing to Protect the People and the Planet,” sheds light on “the Rights of Nature”, a paradigm-shifting approach to legislating resource use. Illuminating essays by Uruguayan author Eduardo Galeano, social and environmental activists Maude Barlow, Shannon Biggs, and others demonstrate the need to broaden legal frameworks to recognize ecological limits, natural laws, and the interdependency of all life.

Out of a landmark gathering of social movements in Bolivia last April emerged the Cochabamba People’s Agreement, honoring the Rights of Nature; this document was later merged into the UNFCCC negotiating text. When the text was released to delegates at COP 16, however, all reference to Cochabamba had been removed.

Shannon Biggs, Community Rights Director with Global Exchange states, “The Rights of Nature offers a platform for action to challenge the market-based approach that dominates the UN COP process.”

As the report outlines, “Entire human societies, our global economic system and indeed our structures of law, place humans not just apart from, but actually above nature. But what is climate change but Nature telling us we have lived beyond the limits of nature’s law?”

This report calls for action from the community-level to the U.N., and offers case studies of legal changes already underway in favor the Rights of Nature. Last month, Pittsburgh, Pennsylvania became the first major U.S. city to ban natural gas drilling while elevating community decision-making and the rights of nature over corporate ‘rights.’

”   While the number of communities taking this approach to ecosystem protection is growing, it is also being actively pursued at the national level. In 2008, Ecuador became the first nation to include the Rights of Nature in its Constitution.   “As a country devastated by oil exploitation, industrial agriculture and international debt, Ecuador needs a bulwark against the corporate plunder of our natural riches. Recognizing the Rights of Nature in our national laws begins to provide that protection,” said Belen Paez of Fundacion Pachamama.

“In order to survive, we need a change in the human relationship with the natural world from one of exploitation to one of democracy with other beings,” says Maude Barlow, national chairperson with the Council of Canadians, “If we are members of the earth’s community, then our rights must be balanced against those of plants, animals, rivers and ecosystems.”

Copies of the report in English and a summarized version in Spanish “Does Nature Have Rights: Transforming Grassroots Organizing to Protect the People and the Planet” can be downloaded at:  www.globalexchange.org/doesnaturehaverights.

Check back on the Climate Justice blog for more posts direct from Cancun in our ongoing series. We’ll also be reporting back on this blog from the global day of action and march of a ‘Thousand Cancuns’. If you’re on Twitter, follow @globalexchange for related COP16 updates from Global Exchange, and use hashtag #COP16 for general COP16 tweets.