Menagerie in Cancun: Of Snakes, Rats, and a Trojan Horse 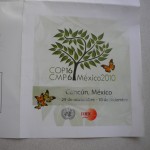 Global Exchange’s Medea Benjamin, Shannon Biggs and Carleen Pickard, along with some Global Exchange volunteers, are joining fellow climate justice campaigners, environmentalists and social justice advocates from around the world for COP16 in Cancun. Jeff Conant writes for Global Exchange and is collaborating media outreach with the Global Justice Ecology Project and the Indigenous Environmental Network during COP 16. Here’s his report:

At COP 16 this week, the tone has been tense and difficult, both inside the negotiations at Cancun’s opulent Moon Palace, and on the margins where social movements, NGO’s, and indigenous peoples’ groups have gathered to raise their voices in opposition to the increasingly crushing decisions of global elites. After last year’s fractious meeting in Copenhagen, and with echoes of the 2003 rout of the WTO here still lingering, Cancun at the beginning of the week was an armed encampment. Between the armored vehicles patrolling the outside and the labyrinthine and exhausting process to get anywhere near the inside, a clear attempt has been made to marginalize civil society, if not to neutralize it altogether. The title of an article in Mexico’s La Jornada newspaper last week summed up the mood well in a play on the literal meaning of the name given to this artificial Caribbean paradise: Cancun is indeed a nest of snakes.

After a year of contentious wrangling between an immovable object and an unstoppable force – the Cochabamba People’s Agreement, ratified by 35,000 people last April, and the Copenhagen Accord, rammed through by the U.S., China, and a small group of economic heavyweights last December – and with countries left and right threatening to abandon the Kyoto Protocol like rats from a sinking ship, it is more than clear that no significant agreement will come out of Cancun next week. But, given the nature of any possible agreement that might be reached, the pertinent question may be: so what?

Coming into Cancun, the refrain from Northern governments and the media has been that there are low expectations for COP 16. From the U.S., for example, the Obama administration will send the Secretaries of Energy and of Agriculture, showing a lack of will to move forward at a high diplomatic level, even as the Wikileaks diplomatic cable scandal undermines whatever vestiges of trust may have existed in the international community. In response to these pronounced ‘low expectation’, Pablo Solon, Bolivia’s ambassador to the United Nations pointed out in an article in the UK’s Guardian, “I wonder whose expectations they are talking about? The reality is that the talk of ‘low expectations’ is a ploy by a small group of industrialized countries to obscure their obligations to act.”

While the U.S. and other powers appear to be doing ‘not enough’ on climate change, in fact they are doing more than enough – blocking the agreements, bullying the other Parties, implementing militaristic anti-immigration policies to further repress those forced to flee environmental and social collapse in the global South, and pushing climate-readiness doublespeak through false solutions like agrofuels, GE trees, and deeply dubious policies like REDD (Reduction of Emissions from Deforestation and Degradation). 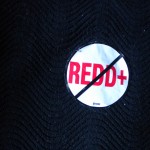 REDD – one of the key policy proposals on the table in Cancun – is indicative of the difference between Copenhagen and Cochabamba.  Far too complex to explain in a few sentences here, REDD proposes putting a price on forests based on the value of the Co2 they capture, in order to keep trees standing by making them worth more as trees than as timber. A fundamental market-based approach to mitigating the climate crisis, many indigenous people and campesino groups, including la Via Campesina and the Indigenous Environmental Network, see REDD as a Trojan Horse concealing within its byzantine innards potentially the largest land grab of all time. Indeed, many of the indigenous delegates I’ve talked to view it as a both a violation of the sacred and the next phase of the genocide they’ve survived for centuries.

Indeed, when the U.S. negotiators yesterday proposed that the words “indigenous peoples” be replaced in the negotiating text with “indigenous groups” – reversing with the stroke of a pen decades of work to gain collective rights for precisely those peoples most affected and least responsible for the climate crisis – they might as well have offered some smallpox blankets to go with it.

With the language from the Cochabamba Agreement sacked entirely from the negotiating text, leaving little but market 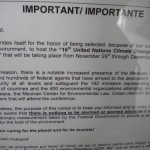 fundamentalism on the table, with the Intergovernmental Panel on Climate Change now giving attention to geo-engineering despite the recently called global moratorium, with murky politics and backroom deals standing in for the “commitment and compromise” called for by the UNFCCC, and with armed federales patrolling the streets to intimidate and criminalize dissent, it is frankly difficult to see how we’ll climb out of the viper pit.