Sun, Sand and Climate Negotiations? My Introduction to the Moon Palace 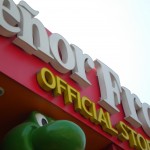 There’s something unsettling about the juxtaposition of negotiating the fate of the climate in the middle of the tequila-shooting, beach-clad dancing frenzy that is Cancun.

The hotel zone along the beach is effectively party central here. Upon arrival I met up with fellow US activists in the lobby of the Flamingo Hotel, across the street from Jimmy Buffet’s Margaritaville and Senor Frog’s.  We discuss the latest announcement that the People’s Accord and the Rights of Nature language— limited as it was — has mysteriously and unceremoniously been stripped from the official documents.  From somewhere, “Jessie’s Girl” begins to play loudly for the second time tonight, and somehow signals and end to the evening’s discussions.

In the morning it is time to get my bearings. Its easy to spot the international delegates, media and activists leaving the hotel strip for the Cancunmesse and Moon Palace—where the official UN action is, and where I’m headed—by the conservative suits and ties that clash loudly against the bright colors and flip flops of the beach revelers.

By design, getting to the official site is no easy feat and it is far off the tourist map. 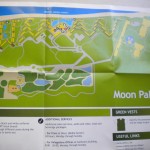 A shuttle leaves the hotel zone once an hour, to begin the hour-long journey to the remote area of the Cancunmesse. This is no place for massive civil society protests, marches, puppets or rallies. You must have an official UN badge to get past the gates or be briskly turned away. Many of our colleagues did not receive credentials, so we’re fortunate to have UN observer status here.

Past security, some of the panel discussions are happening on topics such as planning for adapting to climate change, or carbon trading, though the real action is yet another security checkpoint and another shuttle bus away.  Nearly two hours after leaving my hotel room, I arrive at the Moon Palace, which on any other week serves as an exclusive golf and spa resort.

There are two central buildings—the Mayan Palace and the Aztec Palace. Both are bustling with activity, and nothing but serious faces.

In the Mayan Palace somber plenaries on carbon markets and climate financing are taking place, and though the “heavyweight” officials don’t arrive until Monday, official negotiations in motion.

Across the walkway in the Aztec Palace I begin to see some familiar faces: a handful of environmental justice activists, indigenous leaders, and climate policy folks are speaking to each other, the occasional delegate and the members of the press. Inside is a large bank of computers, where a hundred people are frenetically typing press releases while simultaneously talking on one or more cell phones.

Facts and rumors are flying around and it is hard to tell the difference: I hear that the negotiating text is new and in some areas is radically different than that which was already negotiated upon in Copenhagen.  Where did this new text come from, and by what authority does the new text appear? No one seems to know.  More secretive still, are the whispers of secret deals being made this weekend by a handful of industrialized nations — led by the U.S. — to completely abandon the Kyoto protocol.

True or not, something is very clear—the international process that should be gathering the best and brightest to move forward real solutions for climate change seem to be moving in the opposite direction.  The old paradigm thinking that has taken us to the cliff’s edge is well in effect here in the isolated and protected walls at the Moon Palace.  A cynical person might begin to wonder if more progress might be made over salsa and chips at Sr. Frogs.

I take a seat in the Aztec auditorium, where observers can watch the proceedings of various rooms on a giant I-Max-like screen. It feels like a movie I’ve seen before, and I shudder to think I already know how this plays out.

Tomorrow in a location far from here, civil society will begin to congregate, and it is here that our best hope for real climate change lies, among those working with communities, where the impacts of corporate-led economic policy decisions touch down in real places.