Mexican Families Declare “This Land is Not For Sale” 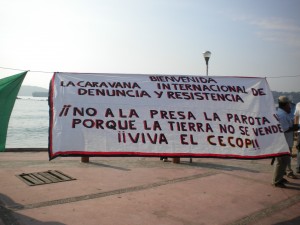 As the international and Mexican delegates met on the beach in Acapulco this morning under a towering Mexican flag, representatives from local and state organizations and unions welcomed our participation on the Via Campesina caravan, and wished us well. They told us that by spending the next 2 days in the state of Guerrero we would be lending support and strength to the struggles that these communities faced.

The international contingent makes up 20 activists and independent media journalists from the USA, Holland, England, Ecuador and Canada (me!). Throughout the day we have picked up people joining the caravan, and expect to have a full bus by tomorrow.

Our spokesperson, Mickey McCoy from Kentucky, let everyone know that what we would see and learn during the next few days would inform our actions in Cancun and into the future. He also connected his work to stop Mountain Top Removal in the Appalachian Mountains to the struggle to stop the La Parota dam in Guerrero. 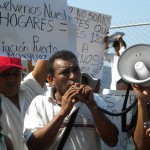 We then boarded the bus and after a short drive joined the community of Puerto Marquez, just outside of Acapulco, in the newly created hotel zone called Acapulco Diamante. On November 10, 150 families were descended upon by 2 levels of police and forcibly removed from their homes, their homes burned and they are still living in crisis and fear for their lives. We met them on the road, above the now fenced off and police ‘protected’ area where their houses stood. Men, women and children told of their experience of being woken, beaten and thrown out of their houses in the middle of the night. One small girl sa 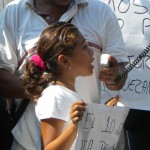 id that her only request was to the Governor: that he allow her family to have a house for Christmas.

We were left with an uncomfortable feeling of the true costs of unchecked ‘development’ driven by tourist dollars. While ocean and sand may cover the postcards and glossy airline ads, we heard today from 150 families whose lives are in chaos as a result of our aggressive sun seeking.”This land is not for sale,” they told us. 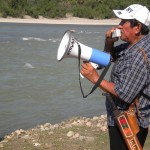 We have heard word of the other caravans’ travels today and as we learn more and more about our convergence in Mexico City and then on to Cancun, I’m in awe of this project that Via Campesina has organized and feel the responsibility that community members have bestowed on us to ensure that their voices are heard in Cancun. As one of my traveling mates remarked today, “makes me proud to be people.”

Throughout the day we have been honored to be joined and guided by Rodolfo Chaves Galindo, a CECOP founders and a tireless fighter to stop the La Parota dam. He has reiterated again and again “this land is not for sale”. 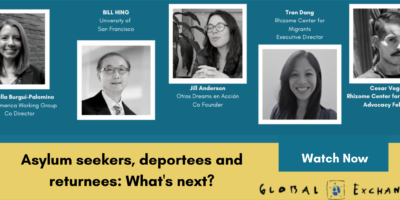