Updates on the Caravans to Cancun 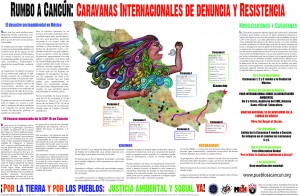 COP16 starts on Nov 29 and runs until Dec 10 in Cancun, Mexico. COP16/CMP6 is the 16th edition of Conference of the Parties of the United Nations Framework Convention on Climate Change (COP). After the failure of COP15 in Copenhagen, sights are set both high and low for this round.

Climate justice campaigners, environmentalists and social justice advocates from around the world will be arriving in Mexico over the next week, many joining the three caravans set to depart Acapulco, El Salto (Guadalajara) and San Luis Potosí, arrive in Mexico City and then travel on to Cancun, arriving December 3rd. The international peasant movement, La Via Campesina, has arranged the caravans, which will stop at a variety of communities in struggle and resistance, with the objectives of:

– unmasking the double moral standard on the environment with which the government of Mexico maneuvers itself amidst the world-wide climatic crisis. At the same time exposing its true rapacious attitude towards the environment and its subservient attitude with the United States government.

– opening up a practical path of convergence between diverse social organizations of the United States, Canada and Mexico, which nowadays share, without knowing it and without much contact, an effort to struggle against neoliberalism.

– connecting numerous environmental struggles of Mexico with the global agenda of the movement against the world-wide climatic crisis.

– contributing, nationally and locally, to the global civil society’s enormous effort of denouncing the destructive attitude present in many regions of the world, and which is being espoused by the decisions and greed of the governments of the richest nations of the world and transnational corporations.

– nurturing as much as possible the campesino, indigenous and peoples mobilizations against the indolence with which the main countries and capitalists of the world will make themselves present at the COP-16 in Cancun.

– contributing in the preparation of new networks of international coordination.

The issues to be highlighted on the caravan from Acapulco will be: community struggles against dump sites, water contamination, hydroelectric generation and control of water, resistance and struggles in the mines and will travel through Guerrero, Morelos, and DF.

The caravans are scheduled to arrive in Mexico City and thousands will participate in the protest for ‘Life, Social and Environmental Justice’.

Global Exchange will be participating in the caravans from Acapulco and Guadalajara all the way to Cancun and will be reporting daily from the road. More on what is being planned for Cancun tomorrow!