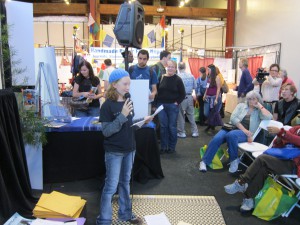 At this fall’s Green Festival in San Francisco, Marie addressed an attentive crowd as she exposed the dark side of chocolate and explained what Fair Trade is doing to fix it, “one bite of chocolate at a time.” She relayed her experience of participating in the Sweet Smarts program and advocated for ways that everyone could get involved in the Fair Trade movement. From tabling, getting Fair trade in supermarkets, to Reverse Trick-or-Treating, Marie has educated her community about the appalling child trafficking and slavery on cocoa farms and how Fair Trade prohibits these practices.

Watch a clip of her presentation at the Green Festival and hear her urge the crowd about the necessity of Fair Trade to end child labor in the cocoa industry and for everyone – especially the youth – to get involved, because it’s not about kids helping kids, it’s about kids fighting for kids.

Find out how you can start your own Sweet Smarts chapter in your community. Get started with your first event by hosting a screening of the latest documentary, The Dark Side of Chocolate.