Time to Raise the Bar in the Cocoa Industry 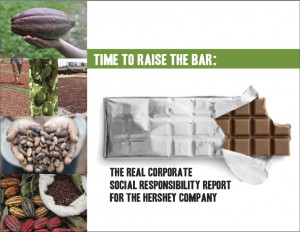 In September, Hershey’s issued their first-ever Corporate Social Responsibility (CSR) report, yet failed to mention any real solutions to issues of forced and child labor that persist in its supply chain. As a response, Global Exchange and ally organizations, Green America, International Labor Rights Forum, and Oasis USA issued an alternative report CSR report encouraging  Hershey to increase its transparency in its cocoa supply.

At the Green Festival in San Francisco this past weekend, Global Exchange and Green America issued the Hershey’s Challenge in order to gather as many petition signatures on the Hershey’s: Raise the Bar campaign. We hoped to target the over 40,000 people in attendance and we’re looking to you to help surpass that goal as we begin to tally up the signatures.

Take action with us as we target Hershey’s CEO, David West and encourage him to Raise the Bar on his chocolate company. Mr. West received a compensation package of over $8million in 2009, while cocoa farmers in West Africa harvesting for Hershey’s were struggling to make ends meet and often employing abusive child labor on their farms. So, join us by signing the Raise the Bar petition and let Hershey’s know that consumers are demanding that they begin sourcing Fair Trade Certified cocoa.

Want to get inspired? These 6th grade students in Joi Chimera’s class in New York are already taking action as you can see in their Raise the Bar drawings asking Hershey’s to take child labor out of the chocolate equation. 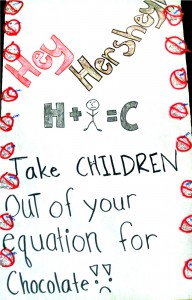 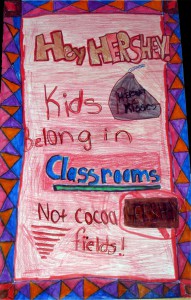 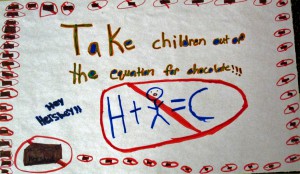 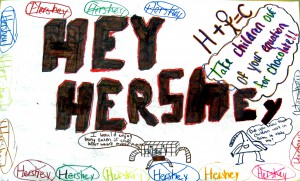 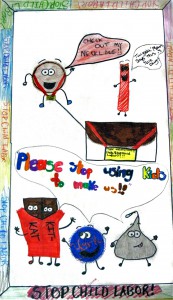 So join these students who are speaking up for children in West Africa and demand Hershey’s and the rest of the cocoa industry commit to Fair Trade Certified cocoa.