From One End of the Rainbow to Another

Global Exchange is now proud to introduce its first ever LGBTQ-focused Reality Tour to none other than the self-proclaimed “Rainbow Nation” itself – South Africa! 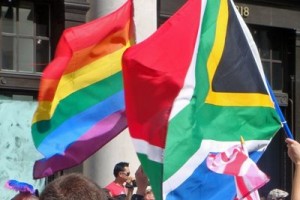 As many nations struggle to provide their LGBTQ citizens with the appropriate all-encompassing freedoms and protections deserved of all human beings, South Africa looks on as it boasts one of the most progressive constitutions on the books. After the dissolution of apartheid in 1994, discrimination based on sexual orientation was explicitly prohibited within the Bill of Rights thus ensuring gay and lesbian equality. Additionally, in 2006 South Africa became Africa’s first and the world’s fifth country to recognize same-sex marriage.

While we in the United States are seeing the slow but steady progression of such rights, unfortunately the same cannot be said for the majority of Africans. Even with South Africa’s enviable constitution, Africa in its entirety has experienced a regressive shift in the provision of basic human rights for its LGBTQ citizens. Thirty-eight African countries have laws that criminalize homosexuality, all of which have penalties ranging from minor fines to the death penalty for engaging in homosexual behavior. Many of these laws found their initial creation with colonial times and today continue to serve as outdated and repressive blockades for the advancement of LGBTQ rights. Not only are members of the African LGBTQ community harassed, humiliated, arrested, imprisoned, tortured and even killed, but those friends, families and activists seen as supporting and/or lobbying for their cause experience many of the same consequences.

The most recent and publicized case of the many to arise within the recent wave of homophobia in Africa was the introduction of Uganda’s Anti-Homosexuality Bill in 2009. The bill is still currently being debated but if passed in its current form by the Ugandan Parliament, it would punish those individuals engaging in acts of homosexuality with life imprisonment. In addition, offenders found to have had sex with a minor or a disabled person or to have infected their partner(s) with HIV/Aids are to face the death penalty. The proposed legislation even goes so far as to punish a third party for the failure to inform the police of possible homosexual activity.

Standing in stark contrast to the current cascade of homophobic campaigns, legislation, and rhetoric plaguing the Africa continent, is South Africa. Not to say that South Africa reigns as the desired example for all countries hoping to perfectly align their laws and the lived realities of their people, because surely South Africa has its flaws. But its progressive laws represent a noble and very brave start to the path of complete LGBTQ acceptance both continentally and globally.

One of the fundamental goals of the LGBTQ Rainbow Nation Delegation is to learn about how South Africa deals with the major schisms that exist between its laws and the day-to-day experiences of LGBTQ citizens. Despite their rights and freedoms having been explicitly outlined within the Bill of Rights, many members of the LGBTQ community see the translation of such rights and freedoms unrealized as they live feeling unsafe in their own nation. More specifically, a demographic currently experiencing this particular sentiment are black lesbians residing in various South African townships. There has been a recent spike in the rape of these women, such an overwhelming spike exhibiting such malicious intent that the phenomenon has earned its own term – “corrective rape.”

“Corrective rape” occurs when a member of the LGBTQ community is raped by a member of the opposite sex in an effort to “correct” their sexual orientation. The most publicized case of this practice to emerge in South Africa occurred in April 2008 when Eudy Simelane, member of the South African women’s football (soccer) team, was gang-raped and murdered by a group of men. An avid campaigner for LGBTQ equality rights, Simelane was one of the first women to live openly as a lesbian in both her hometown and on the national stage.

Anti-gay acts such as the Ugandan Anti-Homosexuality Bill (2009) and South Africa’s “corrective rape” trend not only spot the African social landscape, but the world’s as well. It can be safely said that there isn’t a country in the world that exists as completely free of all degrees of homophobia. What sets South Africa apart from its fellow African nations and from the rest of the world is its unique, complicated and very tumultuous history. The acute awareness of such history has manifested into laws that theoretically accept, accommodate, and protect ALL its citizens. With such guidelines in place, social environments ranging from urban to rural, rich to poor, black to white can begin to move forward and internalize a progressive mentality that normalizes the absolute equality of LGBTQ South Africans.

It is one of the major intentions of the LGBTQ Rainbow Nation Delegation to connect members and supporters of the global LGBTQ community. By learning about parallel issues and struggles that connect us we can create a broad knowledge base and awareness that will ensure no one is left behind in the fight for equal rights – African or American. More specifically, this delegation will serve as proof that hope exists for LGBTQ rights across the African continent and that the myths of homosexuality as ‘un-African’ and/or a ‘Western imposition’ quite simply, fall flat. Being LGBTQ identified is an aspect of the human condition and transcends all ethnic and racial boundaries as exemplified by the existence of LGBTQ individuals everywhere in the world.

In addition to learning about historical and current issues facing South Africa’s LGBTQ community, don’t miss the opportunity to meet with leaders and activists at the forefront of South Africa’s LGBTQ equality movement. Intimate and exclusive, thought-provoking and rewarding, this delegation means to leave you feeling as part of a global (and colorful) family.

Find out more information about the South Africa Rainbow Nation delegation on the Reality Tours website. You may also contact Alessandro at alessandro [at] globalexchange.org or Elliot at nabadu [at] gmail.com for more details.