This blog was written by Tanya Kerssen.  She will be traveling with Global Exchange and Food First on the upcoming Food and Farms delegation to Bolivia.

Drastic variations in climate and topography—ranging from tropical jungles and subtropical cloud forests to the vast arid plains of the Altiplano—make Bolivian agriculture a truly remarkable feat. Before the arrival of the Spanish in 1531, the communities of the Incan Empire developed sophisticated skills for producing food in this diverse environment, making the central Andes one of the most important centers of crop domestication in human history. Andean farmers maintained fields at different elevations, taking advantage of a wide range of microclimates. Collectively managed raised beds and terraces sustained over 15 million people with an abundance of grains, roots, legumes, vegetables, fruits and nuts. Despite their ecological resilience and high nutritional value, many native Andean food plants—such as oca, maca, tarwi and kañiwa—have been ignored in Bolivia’s agricultural development, and are virtually unknown outside the region. As hunger now looms over South America’s poorest country, peasant farmers, producer associations, NGOs, and government officials are working to reclaim Bolivia’s food sovereignty.

Following the Spanish conquest, Andean systems of land use and exchange were radically disrupted. Indigenous people were forced to work as miners or workers on Spanish-owned plantations, and native crops were displaced by crops preferred by the conquistadors, such as wheat and barley.Although a social revolution in 1952 put indigenous farmers back in control of their lands and communities, modern agricultural development has not favored native foods and peasant self-sufficiency. The governments that ruled Bolivia from the 1950s onward viewed Andean farming practices and foods as backward. With the help of U.S. Aid and other international funding sources, they launched a massive ‘modernization’ project to kick start industrial agriculture in the sparsely populated Eastern lowlands. Thousands of hectares of rainforest were bulldozed and replanted with sugar, cotton and soybean monocultures.

With little State support, many Andean farmers struggled on small plots of land or migrated to cities. With the decline of native crops, dependence on imported foods increased. In the mid-1950s, the U.S. began shipping its wheat surplus to Bolivia as “food aid”, creating a structural dependence on imported wheat that persists to this day. The cheap American wheat, subsidized by U.S. taxpayers, undercut producers of local criollo wheat varieties and out-competed other peasant-produced crops, such as potatoes and maize. The extreme free market policies applied in Bolivia in the 1980s further deteriorated markets for small farmers, who now had to compete with imported produce from rich farmers in neighboring Peru, Chile and Brazil. Some joined the swelling ranks of the urban poor, while others relocated to the tropics where they could plant coca, the last remaining smallholder crop with a viable market.

Despite hundreds of years of disrepute, many native crops have survived in the subsistence plots of highland farmers. Although they are unknown in commercial markets, they are consumed by farm families, shared in local festivals and treasured for their flavor, beauty or resilience. In several communities of the Yungas region, on the steep Eastern slopes of the Andes, technicians from the NGO Condesan identified nearly 40 varieties of racacha, a tasty yellow root that is botanically related to both carrots and celery. Other peasant-produced foods such as the llama—an Andean camelid uniquely suited to life at 10,000 to 13,000 feet above sealevel—have been part of a broader cultural revitalization. In 1979, a group of Aymara Indian professionals helped found the Camelid Association of the High Andes (AIGACAA), the country’s first organization of llama herders. Over time the association succeeded in overturning discriminatory laws, building the first llama slaughterhouses and improving sanitary standards for llama meat. Naturally low in fat and cholesterol, it has since become widely accepted by middle and upper-class urban consumers as a healthy alternative to beef or pork.  Llama steak or sausage is now available in many Bolivian restaurants and sold in markets as charque or llama jerky.

Quinoa, another Andean native, has also seen a resurgence in popularity. While it continues to be an important subsistence crop for peasants of the Altiplano, often in association with llamas, the “discovery” of its many nutritional benefits has propelled the grain-like plant[i]to international celebrity status. Global demand for quinoa as a ‘health food’ in the North has soared since the 1990s, sparking the emergence of a dynamic, peasant-led export sector. The well-organized producer associations have benefited from the increased demand, and rural out-migration from the Altiplano seems to have abated as a result. Nonetheless, the quinoa sector also demonstrates the limitations of a development strategy reliant on the global market. The market pull to increase production in the short-term through mechanization has eroded fragile highland soils, leading to lower yields in the long-term. The rising price of quinoa has also squeezed out many traditional consumers, who must turn to cheaper, often less nutritious, alternatives. With a government apparently committed to promoting food sovereignty, Bolivia’s development challenge will be to promote food first, and trade second.

From its chacras (fields) to its kitchens, dining halls and street vendors, Bolivia’s place-based food identity is expressed through countless varieties of potatoes and roots, peanuts, squash, corn, beans and hot peppers. Take for instance Bolivia’s signature pastry, the salteña—a plumper, juicier take on the empanada, consumed as a mid-morning snack. Each of Bolivia’s distinct regions, from the high Andes of Potosí to the temperate plains of Cochabamba, has a distinct recipe (often including potatoes, vegetables, raisins, meat and/orhard-boiled eggs) showcasing the local ingredients and culinary pride of its inhabitants. A necessary accompaniment to the salteña, and to most Bolivian meals, is a spicy salsa called llajua (pronounced ya-hua), made from native Andean peppers such as locotos. Indeed, the ancestors of all peppers are believed to have originated in Bolivia, before spreading to Central America and Mexico. The llajua (or llajwa) found in various regions of Bolivia is distinguished by different herbs: wakataya (which has a licorice aroma) is used in the Altiplano while quilquiña (a cilantro-like herb) is used in Cochabamba.

1 tablespoon fresh (or 1 tsp dried) herb such as quilquiña, cilantro or parsley

1) Remove seeds from peppers and discard. 2) Squeeze tomato juices and seeds into a small bowl. 3) Grind peppers, herbs and tomato on a mortar or in a food processor. 4) Add reserved tomato pulp to the mixture and salt to taste. Cover and refrigerate. Best when used on the same day.[ii]

Bolivian cuisine is a testament to the resilience of Andean farmers, who have fought to preserve the integrity of their agro-food systems for centuries. In January 2009, Bolivia became the fifth country to formally adopt the concept of “food sovereignty” into its national constitution[iii]. Although many challenges remain, this broad-ranging commitment to prioritize sustainable, local food production for local consumption bodes well for the health of the country’s rural and urban communities. Revaluing Bolivia’s neglected native foods for the benefit of local populations is a step in the right direction.

During this 13-day tour, we will travel from the highland birthplace of the potato and quinoa in the Altiplano, to spectacular Lake Titicaca, to the likely center of origin of cocoa in Madidi National Park in the tropical lowlands of Bolivia. We will visit farms, markets, and agro-ecological projects to talk with farmers, consumers, agricultural development experts and food sovereignty activists. By learning first hand and sharing food—succulent salteñas, rich coffee and chocolate, and earthy coca tea—we will reflect upon this region’s remarkable agricultural and culinary heritage.

Lost Crops of the Incas: Little-known plants of the Andes with promise for worldwide cultivation. By the Office of International Affairs, National Research Council. Read online: http://www.nap.edu/openbook.php?record_id=1398&page=1

[i] Often assumed to be a grain, quinoa actually belongs to the chenopod family, along with beets and spinach. It is grown for its highly nutritious seeds, which are rich in protein, essential amino acids, dietary fiber, and minerals. 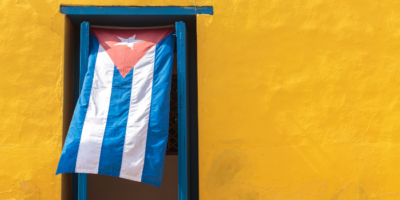 Join us in telling Biden: End The Embargo Now