Journey to Iran – Deserts of Yazd 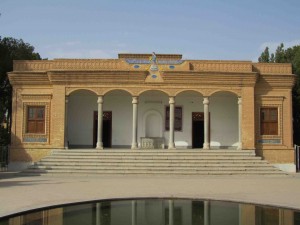 Deborah James advocated for Fair Trade at Global Exchange from 1993 – 2005, and now serves as a member of the Global Exchange Board. She is currently the Director of International Programs at the Center for Economic and Policy Research. She recently participated in the Citizen Diplomacy Delegation to Iran with Reality Tours. In a series of posts, she shares with us her experience.

We spent the last few days in Yazd, an amazing desert town that according to UNESCO, is one of the very oldest continuously inhabited cities in the world (about 7,000 years). Because it was so isolated and dry, it was never made into a capital city, and thus was evidently never overrun and destroyed by foreign armies.

Yazd is the center of the Zoroastrian community in Iran. Zoroastrianism is one of the earliest monotheistic religions, based on the teachings of Zarathustra, at least 1000 years BC. It was the original religion of Iran until the first Arab conquest that brought Islam after 637 AD. The Persian calendar and many contemporary Iranian customs (such as the celebration of the New Year, No Ruz, on the spring equinox) are derived from this ancient practice. We even visited a continuously burning Zoroastrian fire temple dating from 470 AD!

To survive in such an arid climate – Yazd receives only two inches of rain a year – a water delivery system was developed, by digging underground tunnels, called qanats, from the local mountains to deliver fresh mountain water all year round. In addition an air conditioning system was invented using wind towers that cool and circulate the air, keeping buildings habitable. Impressive centuries-old appropriate technological innovations! A former mansion was converted into our lovely hotel; the rooms were built around a pretty pair of inner garden-and-pool courtyards common in Persian home architecture.

Yazd is now one of the most religious cities in Iran. Over half of the women wore chadors, the black cloak that religious women wear over the obligatory manteau (the knee-length jacket) and hejab (head covering or scarf). Generally so far, it is noticeable that choices about dress appear largely generational. Grandmothers near-universally don the chador, and middle-aged women mostly wear a loose manteau and hejab. But it’s apparent how young people seem to have an amazing ability to wear headscarves in a way that reveal more coiffed hair than they cover, and manteaus that show more youthful curves than they obscure!

It turns out that Iran and the surrounding regions have a long history of women (and often men) covering themselves, probably as much to keep out the dust and sand as to hide women from view, including before the arrival of Islam. Some Iranians lamented the opportunity cost of the moral police (ie, couldn’t state employees be put to better use by fixing potholes than policing headscarves!) Others felt more protected by it. I have to admit, since women’s bodies are not displayed, it was a relief to be free of images of half-naked women being used to sell commercial products. In the 110-degree heat of Yazd, I could have done well with out the scarf, but it is a sign of respect as a foreigner to wear it modestly. And at least you don’t ever have to worry about your hair!

I look forward to our next stop, Shiraz, and remember long ago reading Simin Daneshvar’s classic Savushun: A Novel about Modern Iran, set there.