Deborah James advocated for Fair Trade at Global Exchange from 1993 – 2005, and now serves as a member of the Global Exchange Board. She is currently the Director of International Programs at the Center for Economic and Policy Research. She recently participated in the Citizen Diplomacy Delegation to Iran with Reality Tours. In a series of posts, she shares with us her experience.

The moon shone full the night we touched down in Tehran. The day I had left Washington, the U.S. Congress had just passed further sanctions on Iran, in the most bipartisan vote since Obama took office. I had gravely considered whether coming to this nation, despised by so many, was propitious at this time. And yet, I kept thinking, don’t Americans need to know more about this country, especially if our government is actually contemplating military action?

Traveling to Iran with Global Exchange has so far been everything I wanted it to be – learning about ancient history and culture, completely fascinating and beautiful, while getting a taste for as much contemporary life here as possible; a context in which to place current politics. In anticipation of the trip, I had prepared by reading Nikki Keddie’s Modern Iran, Ray Takeyh’s Guardians of the Revolution; Stephen Kinzer’s All the Shah’s Men, Shirin Ebadi’s Iran Awakening, and kept up with the incredibly insightful blog, theraceforIran.com, along with with Robert Naiman’s impressive postings on justforeignpolicy.org, including this excellent article on the UN sanctions. I also devoured about half dozen or so novels and about twice that many films by or about Iranians.

As Americans, we are obligated to be sponsored by a tour company in Iran, and are prohibited from having political meetings, so it wasn’t a normal Global Exchange Reality Tour. Still, the experience has far exceeded my expectations. Our guide, Bahman, is one of the very best I have ever worked with, possessing a deep knowledge and appreciation of the country’s history, a convivial personality and the patience of a saint.

First stop in Tehran was to shop for manteaus, the knee-length coat that women must wear over their clothes. Fortunately, I packed a supply of the obligatory headscarves! My roommate would be the adventurous and ever-curious Alice, a wonderful retired schoolteacher and current health care activist. 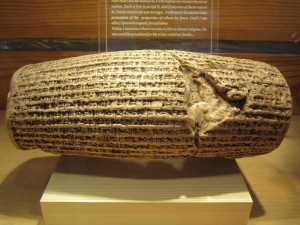 To gain an initial historical grounding, we first visited the archeological museum, where earthenware vessels from Iran dating back from the 5th millennium BC were on display. A highlight was the Cyrus cylinder, known as the first Declaration of Human Rights for its prohibitions on slavery and affirmation of freedom of religion (dating back to 539 BC during the first Persian Empire.)

We also toured both the extravagantly ornate Green and White palaces of the last dynasty, the Pahlavis, who were overthrown in the revolution of 1979, as well as the Golestan Palace of the previous dynasty, the Qajars (1795-1925) who first made Tehran their capital.

We also visited the National Carpet Museum, to survey the great diversity and exceptional quality of this incredible art form that has flourished in Iran for centuries. Each city or region seems to boast its own identifiable patterns, some considered “city” and others “tribal”; quality is determined by the beauty of the design and harmony of the colors, but also by the knots per square inch, along with the materials used (wool, cotton, silk.)

I was delighted that our itinerary included an ethnographic museum, having learned in my preparations of the incredible ethnic diversity within Iran. The Turkomen in the northeast, Baluchis in the southeast, Arabs in the southwest, Kurds in the west, and Armenians and Azeris in the northwest mix not only with the majority Persians, but also with nomadic Qashqai and other tribal peoples, mostly in the southern regions. Many of these peoples speak their own languages, usually alongside Farsi, and many of them maintain distinct cultural heritages that have survived for centuries within Iran.

One evening we had the pleasure of dining with a young Iranian with whom I share a mutual friend. He was eager to meet Americans, and expressed his hope to gain a scholarship for post-graduate study, like so many people his age, looking towards the future.

Aside from museums and palaces, Tehran is mostly made up of about 15 million Tehranis going to work, taking care of their families, and going to school each day. And despite a new and growing subway system, it has the congestion and pollution of many fast-growing urban metropolises. Fortunately, it does not appear to have the same endemic poverty. Still, I barely feel like we are scratching the surface of this city – and tomorrow we fly to the desert town of Yazd in the morning!