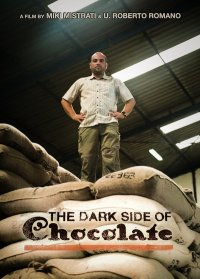 Newly released documentary The Dark Side of Chocolate reveals shocking and disturbing new evidence  that child labor, trafficking, and slavery are continuing in the cocoa industry, nearly ten years after the cocoa industry pledged to end it.

During Halloween Week 2010, please help us raise awareness of this real-life horror.

We are calling on you and individuals nationwide who care about the welfare of children to organize film screenings – large or small – in your home, workplace, or other group.

Help ensure that as many people as possible see this important film and take action to end this tragedy.

Following screenings, attendees will be invited to sign letters asking the Hershey Company to end the use of child labor and slavery in the cocoa fields and to start sourcing Fair Trade certified cocoa, which prohibits the use of child and forced labor.

Filmmaker Roberto Romano has generously offered for you to screen this film for free; participants will be asked to pay only to cover the cost of DVD replication and postage, which will be approximately $3-6.

Our goal is to organize hundreds of screenings nationwide at house parties, schools, congregations, and other venues during a National Week of Action the last week of October.  (If late October is inconvenient, please feel free to screen it later.)

Will you help by holding a screening (or even two)?