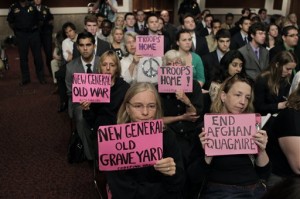 General Petreaus is being confirmed today as the new commander of the war in Afghanistan. His confirmation hearing in Senate Armed Services Committee on Tuesday, chaired by Senator Carl Levin, was noteworthy only because of the Senators’ refusal to ask critical questions about the 9-year-old war that has claimed the lives of over 1,000 soldiers and countless Afghans. The only debate in the hearing centered on whether there should be a timeline of July 2011 to begin the drawdown of US forces, or whether our commitment should be open-ended. Questioning the war itself, as the majority of Americans now do, was only done by the CODEPINK activists in the audience, who were constantly threatened with arrest as they held up signs saying “New General, Old Graveyard”, “Obama’s Vietnam” or simply “No More War!”

There was, however, one heated exchange the media missed because it happened just after the hearing ended. As Senator Levin was leaving the room, CODEPINK members, just back from the U.S. Social Forum in Detroit, confronted the Senator from Michigan. “Senator, how can you spend $33 billion more for an unwinnable war when your hometown of Detroit is falling apart?” said CODEPINKer Tighe Barry, who is from Detroit. “Shame on you, Senator. We need jobs in Detroit, not more bombs in Afghanistan,” said Joan Stallard.

It was the only time the Senator lost his cool. Shaking his finger at the protesters, he yelled, “I live in Detroit. You don’t know what you’re talking about. Detroit’s problems have nothing to do with the war.”

But wasting billions of dollars on more killing in Afghanistan means starving our cities of financial resources, and Detroit is a tragic example of this trade-off. With the tanking of the auto industry and government neglect, Detroit now looks and feels like a war zone. Tens of thousands of homes and businesses have been abandoned and are left crumbling. Unemployment is higher than any major U.S. city, crime and drugs are rampant, and the dilapidated high schools have a shocking dropout rate of 38%.

With all its factories and skilled labor, Detroit could have become the epicenter of good, green jobs for a 21st century economy. With the help of government investment and incentives, Detroit could be churning out electric vehicles and cars that get 100 miles per gallon. It could be building the components for high-speed rail, wind turbines and solar panels. The Motor City could have been in the driver’s seat, steering the country out of its economic depression.

Instead, Detroit is careening off the cliff and elected official like Senator Levin are throwing trillions of dollars into a bloated military budget and unwinnable wars. Detroit’s own citizens—the ones who have not yet abandoned the city—have been forced to pay for their own demise. In the past decade, residents of Detroit have paid $1.8 billion for wars in Iraq and Afghanistan. Taxpayers in Senator Levin’s home state of Michigan have been forced to pay $27.8 billion in war spending since 2001. 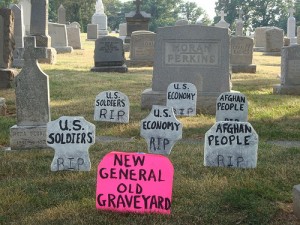 The war has a new commander, but it's the same old graveyard of empires. photo: CODEPINK

That same money could have retrained tens of thousands of workers for green jobs and retooled dying factories. It could have paid for 390,000 teachers and librarians or provided 5,000,000 Pell grants so students could get the new skills they need for the new economy. It could have alleviated Detroit’s devastating 40% poverty rate by providing healthcare for 4 million low-income people or meals to 27 million poor seniors. Instead, our “leaders” have chosen to feed the war machine.

So the next time Senator Levin, or any elected officials, tells us there is no connection between our economic crisis and the war, give ‘em a piece of your mind. Better yet, call your rep today (212-225-3121), as they are poised to steal another $33 billion from our cities and send it off to Afghanistan. Tell them to stop destroying our country—and Afghanistan. Tell them that from Detroit to Kabul, we need jobs, not bombs.