** Download the .pdf of the full report in Spanish here and here. 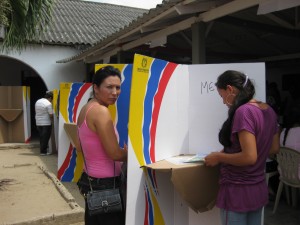 Global Exchange led an observation mission in Colombia in February 2010. The mission was integrated by 22 observers from 7 countries and visited municipalities in Antioquia, Córdoba, Valle del Cauca and Santander to conduct interviews with different social actors, including representatives of political parties, local grassroots organizations, and government officials. One of the main complaints received by the mission concerned the illegal use of a social welfare program called “Familias en Acción” by civil servants and local politicians for electoral purposes. These complaints served as the motivation for this study, which is an analysis of “Familias en Acción” and its impact on Colombian elections.

Global Exchange held a press conference on Monday in Colombia presenting the groundbreaking report. The full report can be found in its entirety in Spanish here and here. including a General Summary and statistical graphs. English readers can read the Press Release for Monday’s conference here.

You can also see the livetweets in Spanish from the Monday press conference on Global Exchange’s twitter feed or search the hashtag: #GlobalFA

The press conference and report has drawn a lot of attention from Colombian press. The articles have been collected on our Colombia Elections Updates page.

For those visuals folks, you can tune into a short video produced by Rob Davenport for CounterCamera Films, in association with Global Exchange.

Colombia: Free and Fair Elections? Some Observations. from CounterCamera on Vimeo.

Colombia’s 2010 presidential elections are a watershed moment. This film short presents a mosaic of viewpoints on whether conditions for equitable and coercion-free elections exist in Colombia. These voices include a state governor, a mayor of a large city, a presidential candidate, neighborhood youth, a protected witness, and the President of the National Electoral Commission.

Stay tuned to our Colombia Elections Updates page for ongoing news about the elections, including the runoff elections scheduled for June 20th.