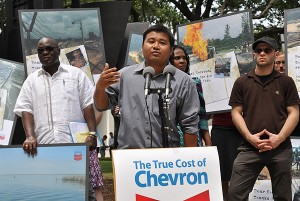 Simply put, when the process of dialogue between disputing parties breaks down and the aggrieved party is denied recourse through the political and legal systems, its members take the next logical step, which military theorist Carl von Clausewitz describes as the “continuation of politics by other means.”

This can be observed in places such as Iraq and Nigeria, developing nations which have three things in common: oil, governments that rely more on fear than representation to maintain power, and foreign investors who collude with these governments in order to gain access that resource.

In the case of Iraq this has led to sectarian conflict and attacks on U.S. troops, who are in the position of having to preserve a fragile security situation while Chevron and other companies attempt to quietly exploit their window of opportunity to re-enter the country.

Nigeria, in comparison, has lost up to 25% of its oil production capacity due to insurgent attacks in the Niger Delta, where Chevron contaminates the air and water with impunity and has directly supported the Nigerian military in its brutal operations against peaceful demonstrators. Faced with the devastation of their food and water supply and the failure of their governments to hold these companies accountable, it is not difficult to understand why citizens of these countries turned to armed conflict in order to change the companies’ cost-benefit analysis.

On May 26 at Chevron’s annual shareholder meeting, I witnessed Chevron refused entry to proxy shareholders from Ecuador, Burma, Nigeria, Colombia, and numerous other places around the world which have been severely harmed by the company. I cannot help but wonder what these individuals’ communities will think after they return from thousands of miles of travel without having been afforded the opportunity to make a simple statement before Chevron’s new CEO and Board of Directors: treat us like human beings.

The air was thick with contempt in front of Chevron’s Houston headquarters as these individuals were escorted out by smirking security officials after being informed that their papers did not meet the company’s qualifications for entry. My thought, watching these community leaders exit the building in compliance, was that Chevron had just made a major strategic miscalculation.

We in the U.S. are fortunate enough to still have a political system which, however frustrating it can often be, still makes it possible to effect change through peaceful political and legal means. Chevron is an American company. Therefore we have a responsibility to hold it accountable for its human rights violations around the world and to impose political and financial costs on it for these violations.

Through a series of long term regulatory and policy battles we will make it increasingly costly for companies such as Chevron to operate with impunity and simultaneously make renewable alternatives more attractive to investors, the ultimate objective being to bring the power of energy production back into the hands of the people. The technology to accomplish this exists today. Our challenge is to win over or oust those politicians who stand in our way through the electoral process.

Our security, our democracy, and our moral authority in the world are at stake in what we will look back on as one of the great political battles of the 21st century.

T.J. Buonomo is a Chevron Program Associate with Global Exchange and founder and editor of Citizens for a Sovereign and Democratic Iraq.  He is a graduate of the U.S. Air Force Academy and former Military Intelligence Officer, U.S. Army.