Heavy Hitters from Green Movement and Organized Labor Come Together

The 2010 Good Jobs, Green Jobs conference was another big step forward in building the alliance between the green movement and organized labor, and the list of attendees was impressive!

The event, which took place May 4-6 in Washington, D.C., was organized by the Blue-Green Alliance, a national partnership of labor unions and environmental organizations dedicated to expanding the number and quality of jobs in the green economy. 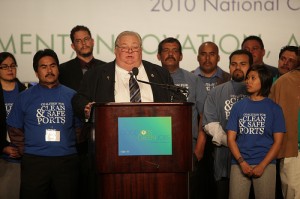 Major unions such as the Teamsters , United Steelworkers, Laborers, Communications Workers of America, the Service Employees International Union, and the American Federation of Teachers were there in force. (There were so many Steelworkers in attendance that a separate registration area was set up just for them.) 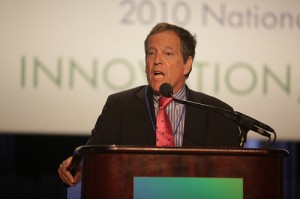 The environmental movement was represented by heavy hitters such as the Sierra Club and Natural Resources Defense Council, and total conference attendance exceeded 3,000 people. It was evident from the speeches of union leaders, politicians, environmentalists, and green business leaders that a growing number of powerful people see the green economy as the next stage of development for the U.S. economy. 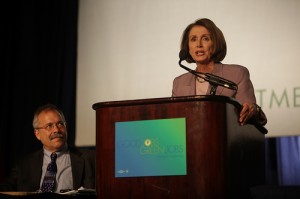 House Speaker Nancy Pelosi lamented how few members of Congress were willing to take on the big corporations, whether the issue is health care reform or building a clean energy economy. She laid the economic crisis at the door of the financial institutions, asserting:

“We cannot ever again have a situation where recklessness on Wall Street creates joblessness on Main Street.”

But she also acknowledged that:

“We must attract the private sector to be successful in building a green economy movement.” 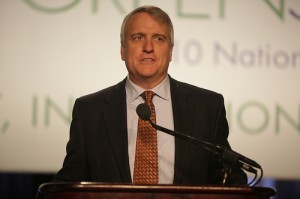 Governor Bill Ritter of Colorado explained the policy changes his state has made, with an emphasis on clean energy as part of their development strategy.  He has signed 48 bills promoting energy improvements, and the Colorado government has set a goal of getting 30 percent of the state’s energy from renewable sources by 2020.

The Apollo Alliance —another coalition bridging environmentalists and laborers—was also in attendance. They are pushing for massive government investment in renewable energy, and they host a great website and Daily Digest email to keep folks up-to-date on energy and climate issues.

The lineup of speakers and workshops was so diverse and comprehensive that it was hard to decide which sessions to attend. The titles of some sessions give a sense of the cutting-edge nature of the issues covered. Here are a few: 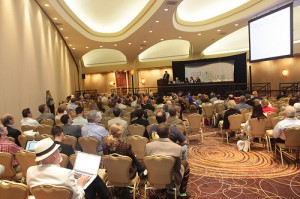 Many speakers emphasized the importance of grassroots organizing. They pointed out that most great leaders had large social movements pushing them.

The coming together of the green movement and major trade unions is creating just such a large social movement. It is precisely coalitions such as the Blue-Green Alliance that will be necessary if we are going to save humanity from itself.