What You Can Do in Response to Flotilla Attacks 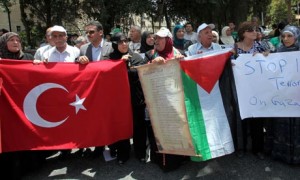 In response to the recent Flotilla attacks on activists by Israeli armed forces, we sent out a letter to people on our email list today with suggestions for what they can do. Here it is:

As Americans paused last weekend to remember our thousands lost to war, we heard news of a fresh tragedy off the blockaded coast of Gaza, home to 1.5 million Palestinians.

We all now know the story of the humanitarian aid convoy, loaded with badly needed supplies and more than 600 hundred activists determined to non-violently defy the Israeli Naval Blockade. Many beloved and trusted friends, including Global Exchange board member, Colonel Ann Wright were aboard.

The deadly Israeli assault that began while the convoy was still in international waters killed at least nine people and seriously injured many more. News about those injured and detained in Israel is still scanty.

This is a painful moment of truth. Israel has become a rogue state that faces growing isolation among the community of nations. There are no circumstances that justify the killing of civilians trying to deliver humanitarian aid.  The blindness of Israel’s leadership to this simple truth should be a wake up call to all true friends of the Israeli and other peoples of the region.

We urge you to contact President Obama, your Senators, and your Member of Congress and let them know you think it’s time to withdraw military support for Israel and its illegal blockade of Gaza.

1. Tell Israel the Painful Truth: http://www.globalexchange.org/flotilla.
2. Organize or join protests in your communities against Israel’s attack on the humanitarian flotilla. Call for the aid workers to be released and allowed to complete their humanitarian mission. Find events near you and post your event details.
3. Call or sit in your elected officials offices and demand that they condemn Israel, cut off all U.S. aid (learn more about the deadly impact of U.S. military aid to Israel), and demand that Israel lift the siege of Gaza.

Don’t let up – now is the time our voices must make a difference.

Thank you, as always, for your work on behalf of peace and justice,

If you would like to receive periodic emails and letters like this one, sign up for our e-newsletter by simply entering your name and zip code in the “Get Email Updates” box located on the top right of this page.