The Arrogance of Power 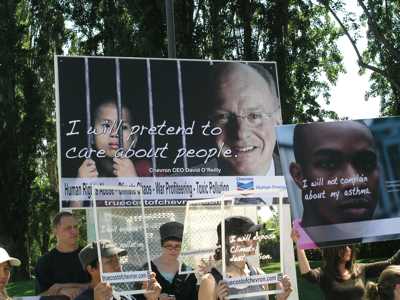 Our representatives have returned from the Chevron shareholder meeting. They were exercising proxies from shareholders, so they asked to speak and had a right to do so.

One of our representatives told shareholders about the alternative annual report, “The True Cost of Chevron“.  David O’Reilly, CEO of Chevron, responded that he had heard of the report, that it was an insult to Chevron employees and it belonged in the garbage.  The gathering of Chevron shareholders snickered.

Inside the walls of Chevron’s headquarters, our broad-based coalition of communities affected by Chevron is irrelevant.  We’re the subject of an inside joke shared by this rich, predominantly white, predominantly male group.

Outside Chevron’s headquarters, our task is clear.  We must make Chevron as irrelevant in the real world as we are in their world of corporate arrogance and irresponsibility.  You can help accomplish that by reading and circulating the report that David O’Reilly doesn’t want you to see.

Download “The True Cost of Chevron” and pass it around.