Global Exchange purchases small amounts of stock in corporations like Chevron so we can speak directly to shareholders in company meetings like Chevron’s Annual General Meeting here in San Ramon, California.  Gayle McLaughlin, the mayor of Richmond, used GX’s share to speak in today’s meeting. 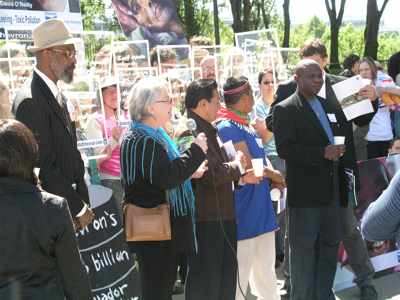 Mayor McLaughlin told the shareholders about the high rates of asthma and cancer around the Chevron refinery in Richmond. She reminded Chevron that community groups CBE (Communities for a Better Environment), Asian Pacific Environmental Network, and West County Toxics have filed suit against the City of Richmond as a result of Chevron’s proposed expansion in Richmond. The judge in the case appears ready to rule against the Chevron expansion.

Mayor McLaughlin said that if Chevron cared about the community, they would abandon the current expansion plans and work with the City of Richmond to guarantee that dirty tar sands crude oil would never be processed at the facility.

She also noted that Chevron continues to doggedly pursue a lawsuit against Richmond Measure T, which imposed increased business license fees for large manufacturing operations like Chevron.  The Chevron lawsuit has held up rougly $25 million in revenue that the City of Richmond desperately needs.  Low income fence-line communities like Richmond can use all the revenue they can get to help repair the damage done by firms like Chevron.