It’s Sunday, the evening before the Capitol Climate Action.

The Global Exchange Power Shift group has been here in Washington, DC for days. Check out the GX @ Power Shift blog to see what the Power Shift folks have been up to. Those of us in the Capitol Climate Action group arrived just a few hours ago.

All weekend long the Capitol Climate Action organizers have run nonviolence training workshops. The point of the trainings is to make sure everyone agrees on the ground rules.

We want this demonstration to be exactly that – a “demonstration” of how important we consider the issue of coal.  We’re trying to change the debate about energy.  And in order to do that we need to convince people that we have a point.  Respectful, nonviolent behavior is the only way we can reasonably expect people who might have other opinions to seriously consider our point of view. 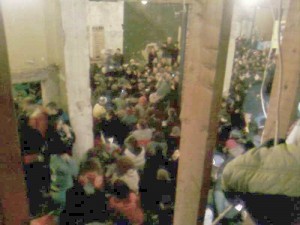 I apologize for the seriously grungy quality of the photos, but I’m not exactly equipped for portrait photography at this point.  I’m trying to juggle being a part of things and talking about them, so something had to suffer.  It’s the photos.

The photo at the left here is of our last training of the day.  It was held in a seriously beat up theater space, but it was perfect for getting a large group like us together.

In this meeting we’re getting the last details about how the demonstration will be handled.  One of the key concerns is the weather.  A big winter storm is about to arrive and the wind chill factor during tomorrow’s demonstration is supposed to be 11 degrees.  We’re being told how to spot the early signs of hypothermia and what we should do about it. 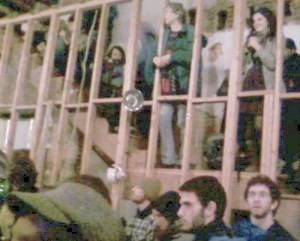 I’m not sure I can properly describe the feeling here. It’s a combination of excitement, anticipation, emotional connection to the people around you, and contentment. Very powerful stuff. The room shakes when people cheer, applaud and stomp in response to the speakers.

We’re being told that we’ve already met the goals of the action.  We have already changed the debate about energy.

Nancy Pelosi and Harry Reid, the leaders of the Democratic Congress, last Thursday issued a statement calling for the Capitol power plant to switch to other fuels from coal.  That statement would never have been made without this action.  It’s a critically important thing to acknowledge because it means that the real power to change things rests with all of us, not our leaders.

This action, about this particular power plant, is symbolic.  It’s not really about this plant.  It’s about all of the plants around the world that are making it impossible to control climate change.  We need a thousand more of these actions in every city all over the world where power is generated with coal.

On Monday, I’ll be a part of the Capitol Climate Action.  I’ll try to post some stuff from my cell phone.  But please don’t expect even lousy quality pictures.  And the posts will probably be VERY short so I can get my hands back inside my gloves before they get numb.