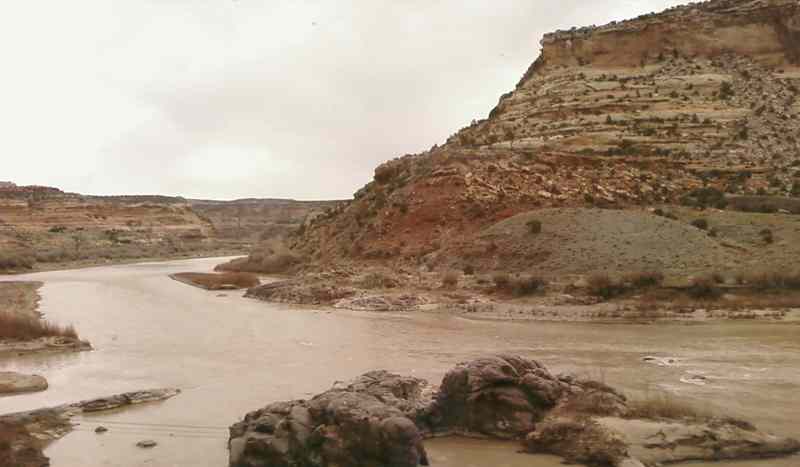 That’s the view from our Amtrak California Zephyr lounge car as it travels through Ruby Canyon, just outside of Grand Junction, Colorado.  And that’s the Colorado River flowing through the canyon.

I should be honest here and admit that I was hoping for a photo of the white “Utah | Colorado” state boundary marker hand-painted on the bluff just north of the tracks, but I couldn’t get my cell phone going fast enough.

On the other hand, the story of the Colorado River is a great way to talk about climate change.  Technically, the Colorado flows from its headwaters in Colorado just west of the Continental Divide all the way to the Gulf of California just across the Mexico border.

Except it doesn’t.  There is rarely any water left to flow into the Gulf.

Colorado River water is split between the seven states in the river’s basin and Mexico.  Wyoming, Utah, New Mexico, Colorado, Nevada, Arizona and California all get a share.  Most of the major cities in the far Southwest use Colorado River water for drinking, but roughly 90% of the water in the Colorado is diverted for agriculture. 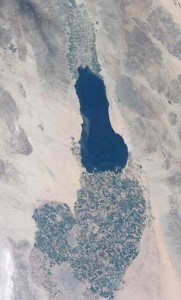 California gets the biggest share.  It takes a lot of water to convert a desert into an agricultural powerhouse, but that’s what Colorado River water has done for southeastern California’s Imperial Valley.  Massive importation of water from the Colorado has permitted the Imperial Valley to run two crop cycles per year and become a major international supplier of winter fruits, vegetables and grains.

Climate change is a real problem for this arrangement.

Desert cities, suburbs and industrial agriculture that overuse the region’s scarce water are just not viable in the arid Southwest, with or without climate change.  But when you add the expected additional drying of the area due to a warming planet, we’re left with a deadly mix.

Obama’s Energy Secretary, Stephen Chu, recently made it clear just how bad the situation could become.

“I don’t think the American public has gripped in its gut what could happen,” Energy Secretary Steven Chu told the Los Angeles Times. “We’re looking at a scenario where there’s no more agriculture in California.” And, he added, “I don’t actually see how they can keep their cities going” either.

Action to halt coal-fired power generation is the single most important thing we can do to slow the increase in global temperature and prevent scenarios like those Chu described from becoming our grandchildren’s reality in California and throughout the world.

The point of our cross-country train trip to Washington, DC for the Capitol Climate Action is to make coal the central energy issue.  We’ll hit Washington, DC midday on Sunday and we’re starting to get excited.