3am in Salt Lake City

I ought to be asleep, but instead I’m checking out images and YouTube videos about coal mining in Utah.

There’s a lot of coal mining in the eastern part of the state, which you could probably guess from names like Carbon County and Carbonville.  Carbon County has some quaint old ghost mining towns you can visit to see what it was like back in the day, but mining companies don’t spend a lot of time publicizing today’s practices. 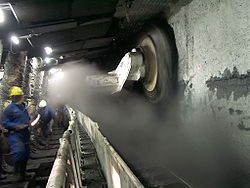 Longwall mining is one of the preferred practices around here these days.  Longwall mining chews up an underground slice of coal a couple of miles long and 500-1000 feet wide.  It has a number of nasty side effects like, for example, the fact that after the longwall operation is done, there’s a long chunk of earth missing.  So the land above suddenly subsides, sometimes doing severe damage to above ground structures, changing the course of rivers and similar neat stuff.

Mining coal is just a nasty business.  We need to leave the rest of this stuff in the ground.

Yesterday, Nancy Pelosi and Harry Reid announced that they wanted the Capitol Power Plant to quit using coal.  That’s an important victory for the Capitol Climate Action before the action even takes place next Monday.

But as nice as this success is, there are much bigger fish to fry.  And that’s the real point of the Capitol Climate Action.  Coal needs to be abandoned everywhere.